Gold Camp Road was built in the 1890’s for a narrow gauge railroad to connect Colorado Springs to the Cripple Creek mining district, about 20 air miles to the west. Eventually, the railroad was scrapped and the road bed was converted to vehicle use.

There are several narrow tunnels along the road, and in 1988 a fortuitous partial collapse of tunnel #3 precluded further vehicle use over a road section about 8 miles long. A new trail goes around and over the collapsed tunnel. This 8 plus mile segment of the road is now used mostly for hiking and biking.

On Wed, July 28th, Ronda and I took Abby and drove down to the Cheyenne Mountain area to pick up the Gold Camp Road Trailhead. The weather was overcast and the temps were in the 60’s but the prospects for the clouds clearing off were good as it looked pretty sunny off to the north. We left the trailhead and proceeded up the gentle switchback that makes a big detour around the canyon. The view of the switchback is stunning but you really don’t appreciate it until you are coming back to the trailhead and looking west.

The collapsed tunnel is at the end of the switchback and we took the short detour up and around the tunnel. On the far side of the tunnel the trail to St Mary’s Falls branches off to the right going along a small mountain stream. We anticipated we would return that way as our plan is to hike only a few miles up Gold Camp Rd (GCR) then cut across the ridge picking up the trail to St Mary’s Fall.

We proceeded along GCR and quickly discovered many wild red raspberries growing along the roadside. Fortunately, there was a bountiful harvest and although the berries were quite small they sure were tasty. Abby was not overly impressed and preferred to chase after the local varmints. We were afforded several nice views of Colorado Springs off to the east as we progressed along the gentle grade.

Soon Cheyenne Mountain began to dominate the view to the east. I tried to take a few pictures of the city spread out to the east with the mountains in the foreground but my camera skills are not yet sufficient and they did not turn out to well. It was about this time as we were approaching the end of our journey down GCR that we saw a flight of six F-117 Stealth fighters leaving Peterson AFB and heading off to the north. It was the first time I have ever seen them in flight.

We looked for the connecting trail to St Mary’s Falls (SMF) but must of have missed it. After consulting the map I was pretty sure we needed to just make our own trail up the side of the hill and so we did. It was a rather steep ascent and we had to stop several times to catch our breath but sure enough at the top we found the trail coming along the ridge and just beginning to descend the other side. We followed it down to the streambed at the bottom and crossed over and picked up SMF trail. Abby was delighted to find the cold mountain stream and she laid down in it for a little bit to cool off and have a nice drink.

We were not sure exactly where the falls were but they appeared to be further upstream. We had originally intended to head back down but decided to proceed upstream and see if maybe it wasn’t too far. SMF trail is a nice foot trail that meanders along the stream but starts to get a little more difficult as it progresses up the canyon. We could hear the falls so we knew it could not be too much further. We asked another hiker who was returning down the trail if it was worth the trip and we were assured that it was.

Finally reaching the bottom of the falls, we ventured out into the middle of the stream and took a few pictures. Somewhere along the way our spirit of adventure was spiked because next thing we knew we decided we wanted to find the top of the falls. The sign we had passed a little earlier indicated the top was another 2 tenths of a mile along the trail which had headed back the other direction. This seemed a little odd when the top of the falls was obviously just up the side of the mountain a little ways. So… we decided to just scramble up the side of the mountain and figured we would surely connect up with the trail (after all, it worked last time right?).

This little effort rapidly became more than we bargained for but nothing that we could not master! Abby was a earning her right to be called “Mountain Dog!”. We finally made it to the top and after hunting around a bit found the trail (woo-hoo). We decided to stop and eat our lunch on a real nice rock outcropping with a view.

After a satisfying lunch and rest stop we looked for but could not find the top of the falls. By this time our two hour planned hike had now reached hour four and we decided maybe we had better head back. We followed the trail back down a rather nasty series of switchbacks (finally understanding why the trail was rated “D” for difficult) and eventually made it back to the streambed. We then followed the streambed as it made it’s way down the canyon. We connected back up with GCR at the tunnel and made our way back around to the trailhead just as it was threatening to rain.

All in all, we hiked 8.3 miles which was a bit more than we had bargained on. Our legs were definitely tired but had held up remarkably well. 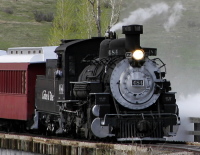